This is a sight that would strike fear into the heart of any Frenchman – a whole company of Sharpes and Harpers charging down onto them from oe’r the hill and far away!

The two figures on the left came free with the original release of the ‘Sharp Practice’ rule-set from Too Fat Lardies. Next to them are foot and mounted versions made by Brigade Games. Beside them are a pair by Chiltern Miniatures, with Sharpe wearing the tatty raincoat from the Sharpe’s Waterloo video. Finally, the 40mm versions on the right are by Sash and Sabre.

Here’s a closer look at the Sharpe and Harper figures by Brigade Games. From amongst my collection of Sharpes, I think Brigade Games have best captured Sean Bean’s likeness.

Brigade Games also make a set of 95th Rifles figures that are very obviously based on some of the characters from the TV series.

First comes Francis Cooper, born and bred in the London slums, where he learnt his trade in thieving, pick pocketing, and housebreaking.

Then there’s Isaiah Tongue, an educated man, but also an alcoholic. He could recite passages from the Bible, and was one of the few soldiers who was able to read.

To the right of Sharpe and Harper is Rifleman Harris, red-haired and ever cheerful,  clever, well-read, amusing, and loyal.

The oldest rifleman is Daniel Hagman, a former poacher who, when caught, was given the choice of prison or the army.

Brigade Games also make a range of other characters from the TV series. Many of them come in both foot and mounted versions. Here is Michael Hogan, the middle-aged, snuff addicted Irishman of the Royal Engineers, who also serves as an exploring officer for Wellington. 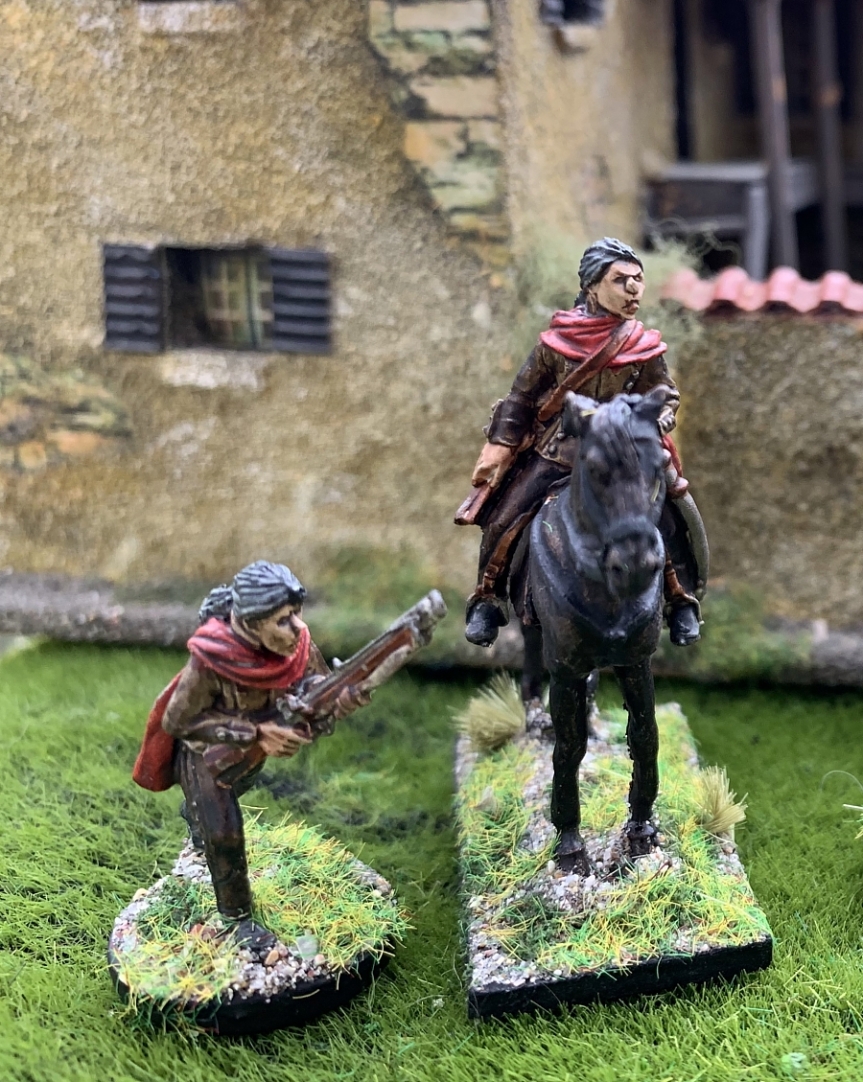 Sharpe married Spanish guerrilla leader Teresa Morales the day after the sack of Badajoz She fights under the nom de guerre, la Aguja, or The Needle, a name given to her by Sharpe. 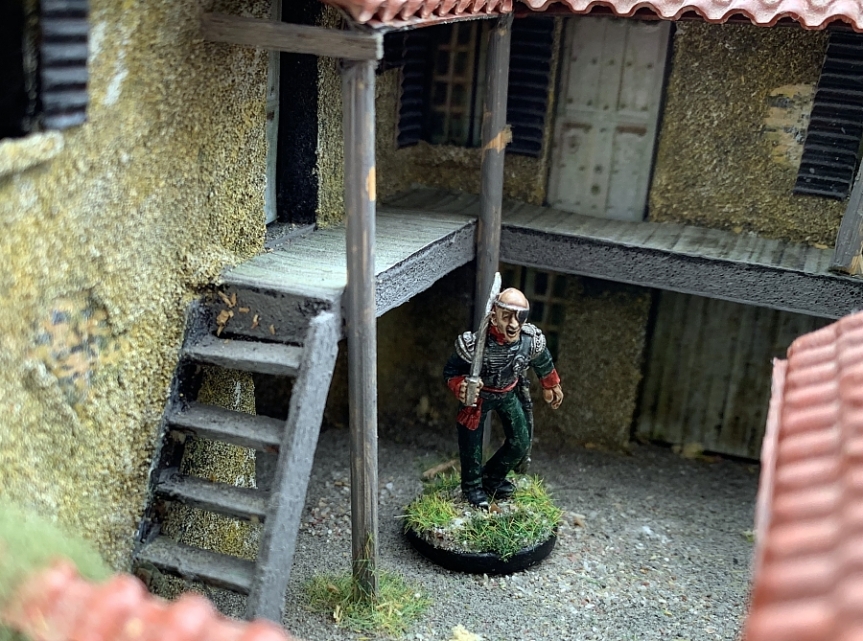 One of my favourite characters is William Frederickson, or ‘Sweet William’, a captain of the 60th Royal American Rifles. He suffered serious facial wounds which destroyed his left eye, tore away most of his right ear, and knocked out several teeth. When fighting he takes out his false teeth, and removes his wig and eye patch, to terrifying effect.

Then, of course, there are Sharpe’s enemies.

Pierre Ducos is a political animal, spymaster, and master manipulator. He was a protégé of Joseph Fouché, the notorious secret policeman of the revolutionary period. Weak and timid when physically confronted, he claims to detest ‘unnecessary violence’ but is utterly indifferent to the suffering of others.

And who can forget the evil Sergeant Obadiah Hakeswill. He fears nothing, truly believes he cannot die, and thoroughly hates Sharpe as a man who does not fear him, and as an upstart. In his shako he carries a stolen painting of his colonel’s wife, which he talks to as if it’s his mother.

I have used a pinning technique for the mounted figures, so that the horse can be easily displayed with or without its rider.

The figures are mainly painted with GW’s Contrast paints, apart from Ducos’ jacket (which I wanted in a different shade of green than the Rifles’ coats) and the oil-painted horses.

3 thoughts on “A multitude of Sharpes and Harpers” 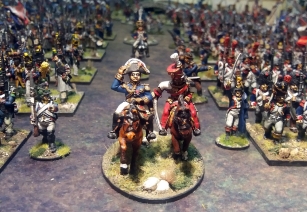 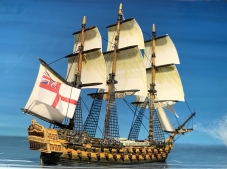 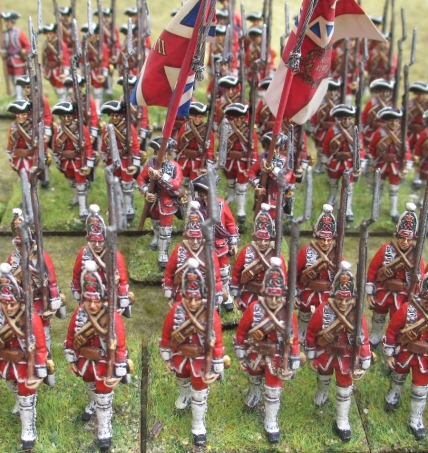 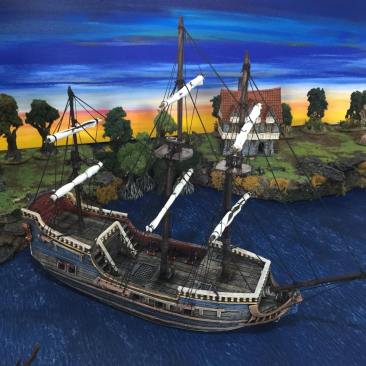 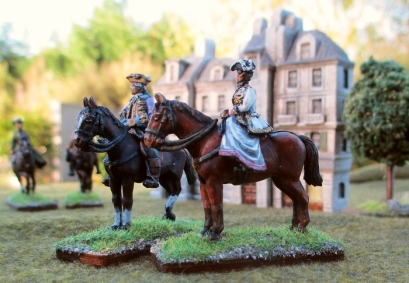 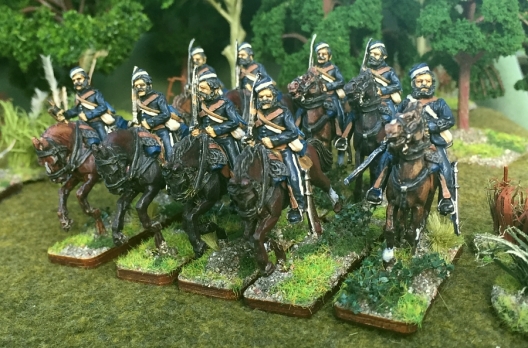 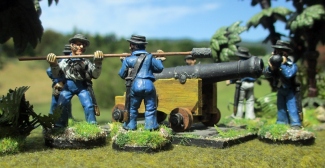 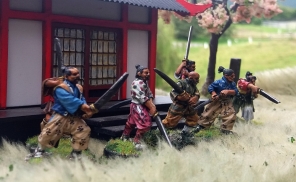 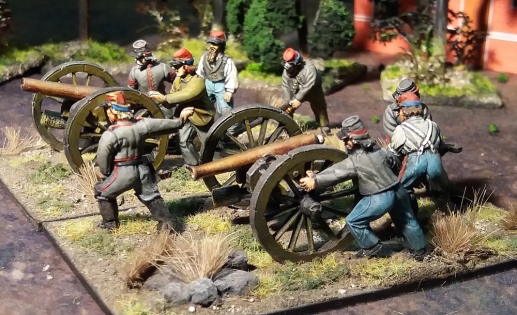