At first glance, this could be a wartime newspaper photo of Dutch soldiers defending a village during the German invasion in May 1940 … until you spot the figure bases, that is,  and realise this is a wargames table with 28mm figures.

I’ve recently been adding accessories to my Dutch village, such as latex brick roads from Early War Miniatures, and plastic lamp-posts, power poles and brick walls from Rubicon.

They really bring to life the Gungnir cardboard buildings I’ve previously reported on, as you can see from this picture of Dutch soldiers and a Landsverk armoured car on patrol outside a grocer’s shop.

Let’s take a tour of the village (don’t forget to click on the images to examine them in more detail). 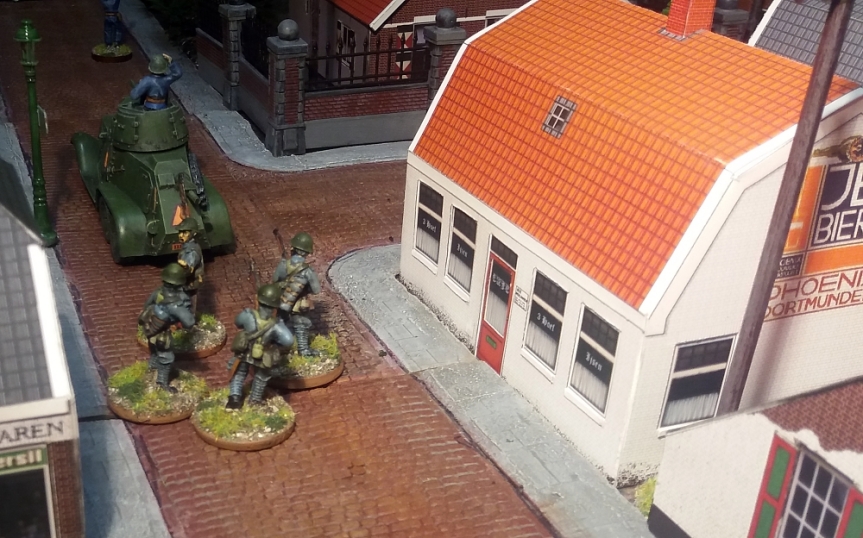 Soldiers follow the armoured car past a corner cafe, with period advertisements for Phoenix Dortmunder beer on the walls, and ‘3 Hoef Eisen’ beer on each window.  The miniatures and the armoured car, by the way, are all by May ’40 Miniatures. 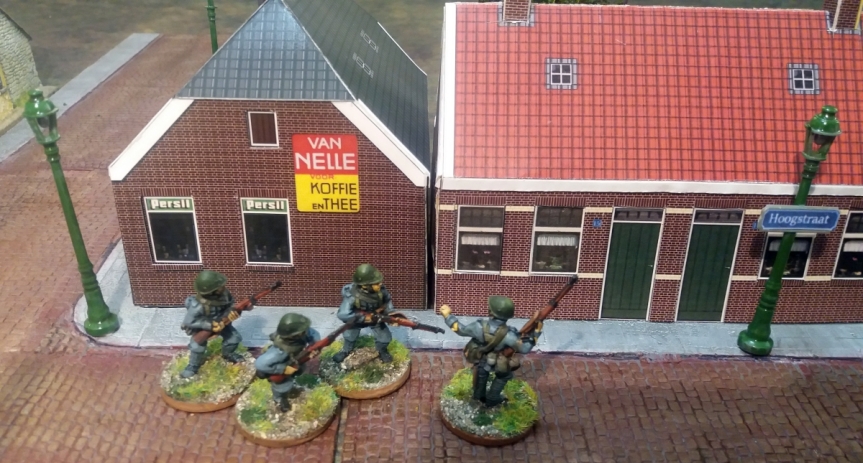 Advertisements for van Nelle coffee and Persil washing powder adorn the side of the grocer’s shop in the Hoogstraat (High Street). The street sign comes in the Rubicon lamp-post kit.

At this intersection you can see how the latex roads give a good impression of brick roads. I painted them a dark brown-red, then dry-brushed them with beige and white paint to bring out the detail.

The Landsverk proceeds down the Hoogstraat. This photo gives you another view of the beer advertisement on the side wall of the cafe.

The crew of the Landsverk spot an enemy aircraft. The beauty of cardboard buildings is that once you have bought the file, you can print out as many as you like. Thus here we see three of the same buildings combined to make a row of houses. I varied the windows slightly before printing, but otherwise they are identical. 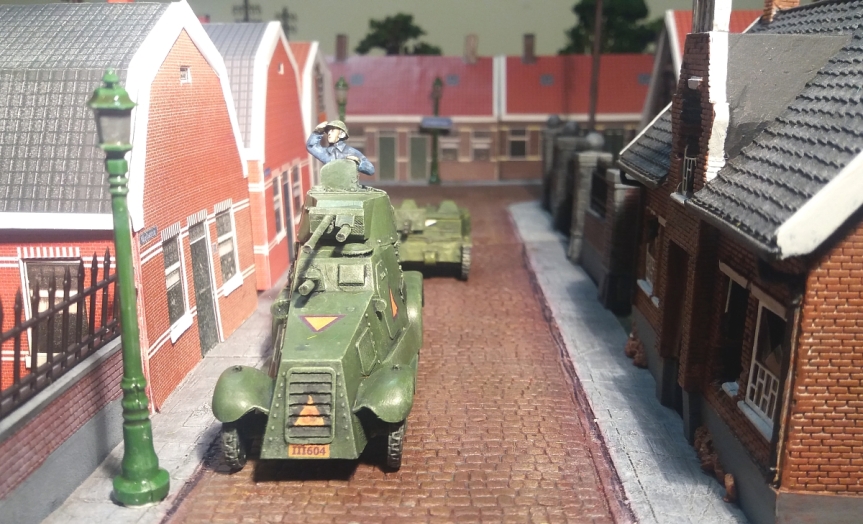 Around the corner from the row-houses, these typical hip-roofed buildings on the left certainly shout ‘Dutch’ all over them! On the right is a resin kit of a ruined house, made by Airfix.

A Böhler 47mm anti-tank gun is emplaced behind the ruined house. I’ve made the Airfix building taller by adding a layer to the bottom of the walls. The rubble is made up of small bits of real brick.

A team of medics rushes past an ornate farm-house. The brick wall kit by Rubicon is very cleverly designed so that you can take the pieces apart and adjust the corners and gates to suit any location.

An officer gives orders to the crew of a Carden-Loyd tankette parked outside a large farm-house. This photo gives you a good look at the very nice Rubicon lampposts.

An NCO urges caution on his troops as they ready themselves to enter the barn attached to the back of the large farmhouse. 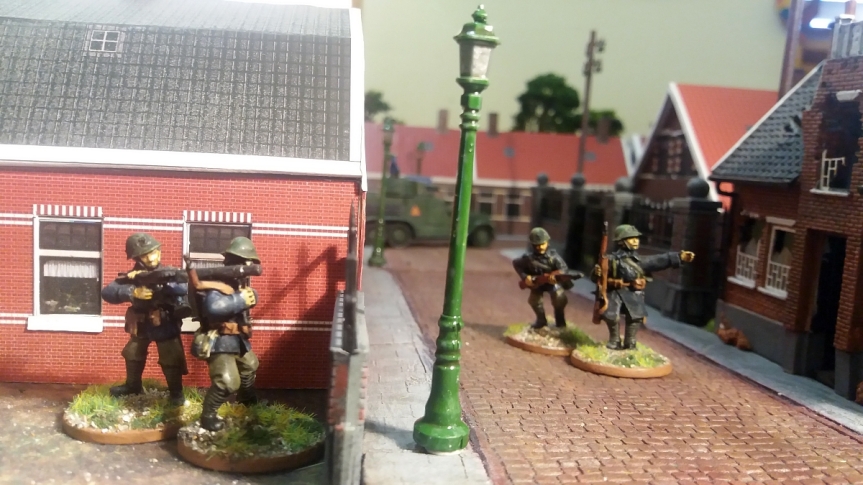 Dutch marines in their dark-blue tunics defend the edge of the village, whilst the Landsverk prowls in the background.

Here’s the whole village. If you look carefully, you’ll spot an interloper amongst the cardboard buildings – a resin model of La Haye Sainte in the top left corner! I’ll need to make up a couple more card buildings to take its place!

Let’s finish by going back to black-and-white to show once again how effective the overall effect of the buildings and accessories is. 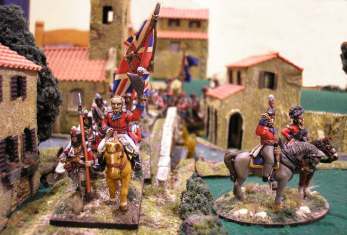 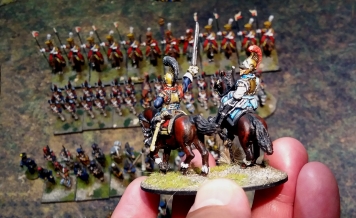 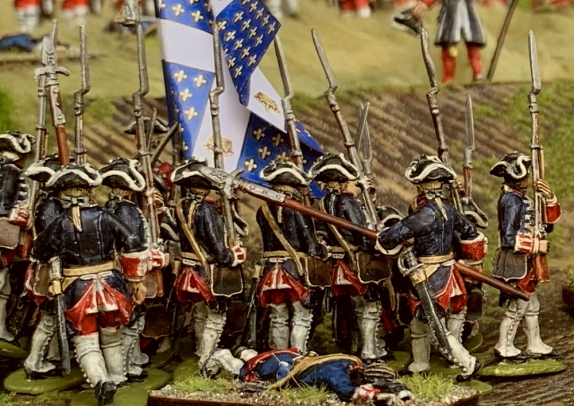 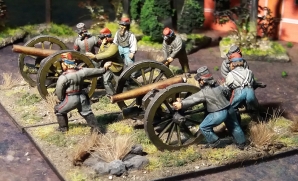 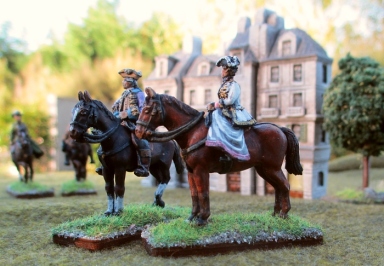 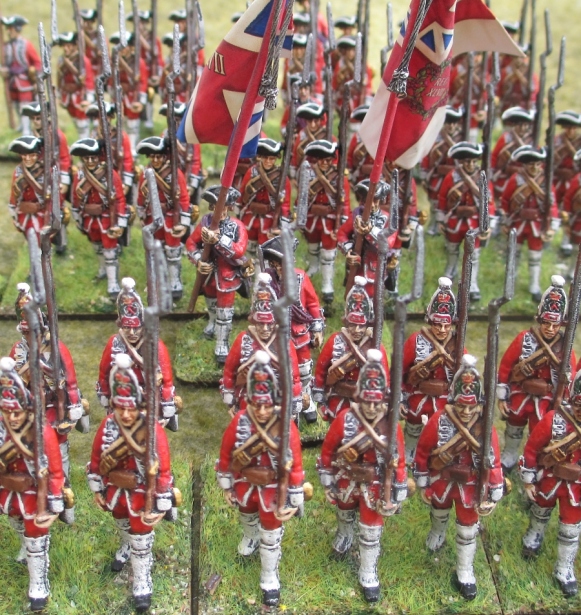 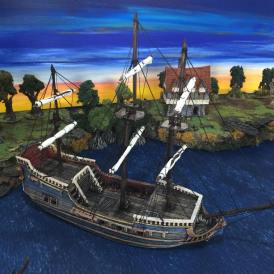 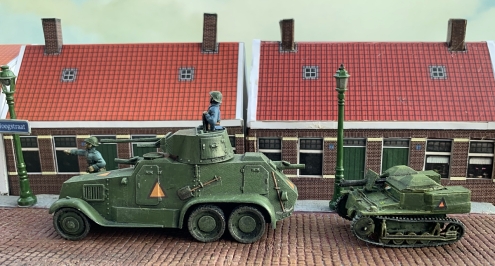